Fountain Hills is a small, scenic desert community located east of Scottsdale and about 45 minutes from Sky Harbor International Airport. The town is surrounded by mountains with sweeping mountain views including Four Peaks, the Superstition Mountains and the McDowell Mountains, and boasts a natural desert landscape. There is plenty to do in Fountain Hills.

Fountains Filled with Dreams and Potential

Fountains have long been the source for helping people to attain their goals, dreams and desires. The lore and poetry of fountains continues to thrive in Fountain Hills today.  Fountain Hills has its own folklore with its own man made the tallest fountain that sends water up to 562 feet into the air.

The Fountain is a place for relaxation and contemplation, inviting to the casual and superficial glance of a passer-by, but also serving as sources for deeper meditation and inspiration.  A place where we can send our prayers to heaven and meditate to hear the answers as the sound of the water falling back to earth inspires us with renewed vision.

There is no escaping that we need water to live.  Living in the desert, water is a blessing.  While the Fountain water is reclaimed water, and we are not allowed to bath in it for rejuvenation or throw coins into it for our wishes, The Fountain is a symbol of moving forward as the flowing water moves chi or energy, the lake is symbolic for a place of relaxation, and we can still contemplate at the lake about our dreams for the future and see our prayers and wishes shoot up to the sky in the fountain every hour of the day.

The Indian Meaning of Water

People have been throwing coins into fountains seemingly as long as there have been coins and fountains. The tradition all started with water. Water, of course, is vital to sustain human life. Potable drinking holes in many regions weren’t the easiest things to find. Thus, where clean water was available, many early European tribes believed that such areas were a gift from the gods.

The idea that drinkable water was sent from the heavens remained even as wells and fountains were built. Often, a small statue of a god could be found next to early wells and fountains, turning them into a type of shrine.  As you probably already know, presenting gifts to gods is an ancient practice that was usually meant to appease angry gods, or to act as a payment for a request or prayer. In the case of fountains and wells, people would toss in a coin while sending up a prayer—an early version of making a wish.

These days, believing in gods watching over the wells or the thought that water has healing powers has largely lost favor, but people still practice this ancient tradition.   However, sending up your wishes at fountains is still practiced today.

Fountains are one of the most effective and popular feng shui cures, water fountains bring good luck, prosperity and abundance to those who believe.  The flowing water of the tallest fountain helps to reactivate stagnant chi, restores balance to the area and produces beneficial yang energy.

During Greek times, Pirene was the place for poets to go to drink the water from the fountain to receive inspiration.

Many explorers searched the world for the Fountain of Youth, a place where youth could be restored.

The Fountain of Youth myth is certainly a venerable one with many offshoots. The written references to it go back more than 2,000 years.  Herodutus wrote about a legend that Alexander the Great, after conquering much of the known world of his time, was interested in finding a river with magical waters that could reverse the aging process.

Apparently the tale of such a miraculous fountain persisted because much later on, in the 12th Century in Europe, there were popular romances telling tales of a king named “Prester John”, who reportedly ruled over a kingdom wherein there was a river of gold and a Fountain of Youth.  There still exist some art objects from the medieval period that display the theme, indicating that it continued to spark the imagination of artists and artisans for several hundred years more.

While the pursuit of unending youthfulness is still of primary interest for humans, most of us look to cosmetics, exercise and diet these days.  Still, a trip to Life in Balance Wellness Center and Spa, is a temporarily rejuvenating experience all in its own.

There’s so much to see and do in Arizona, let us help you discover and plan a perfect Arizona vacation getaway. We can customize this Arizona Vacation Package just for you, according to your budget, time and activities you want to do. From taking a scenic hot air balloon ride overlook the valle ...

Join many of our guests who have discovered the healing pleasures of a spa vacation at our Wellness Center. There is no better gift to yourself than our " Spa Spa and More Spa Vacation Package ", lavishing yourself in spa treatments is not only essential for your health and wellbeing, but also a wel ...

You Spa I Golf Vacation Package

Many couples love to vacation together, but they do enjoy different activities like golf and spa while they are on vacation. Our " You Spa I Golf Vacation Package " is perfect for you. while one of you enjoy spa-ing with the inspiration of Red Rock Mountain as a peaceful backdrop, our wellness spa i ...

Are you looking to treat your partner with a romantic getaway? This Couples Romantic Getaway Package is perfect for a romantic night away in our Luxury Suite. Let us take care of every detail to ensure ultimate romance and relaxation. With Champagne, Fruit and Chocolates on arrival and a delightful ...

This Girlfriend Getaway Wellness Spa Package is one of the most popular packages. Reconnect with your best friends, moms, or sisters and escape to the beautiful Arizona for an unforgettable peaceful wellness retreat. Enjoy healthful and fun cuisine, indulge in relaxing spa treatments, and experience ...

Sign up with your email and always get the latest news! 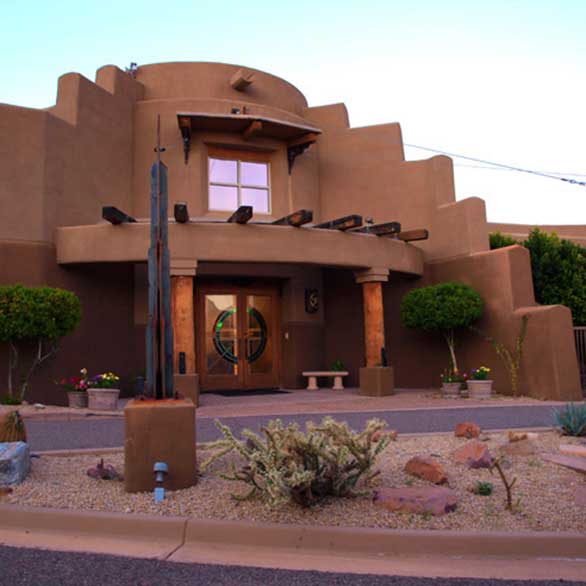